ArtDynasty presents 4 masterpieces of a Soviet Georgian Artist, Cornelius Sanadze, exemplary of Soviet Art yet individually expressive from his own convictions.

Soviet Artists had to illustrate and develop dictated Soviet ideology and policy in order to uplift the morale of the people in support of their Soviet Government. 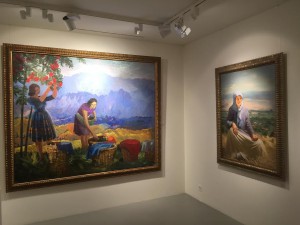 This large painting honors the young fruit pickers so Sanadze does follow the rules of Soviet Program Work.

On the other hand, Sanadze breaks the conventional rules by using vivid colors amidst the backdrop of the dramatic Caucasus Mountains to show his love and respect to his motherland of Georgia.

In another style of painting that is inspired by the Dutch School, Sanadze dramatizes an “Old Woman” to honor the peasants in the Working Class that is highly valued and praised by the Soviet regime.

You see her tired but calm face and her hands wrinkled by agricultural toil. This demonstrates Sanadze’s respect for her as a typical representative of the farming class, yet he reminds us of the natural beauty of Georgia, his motherland. 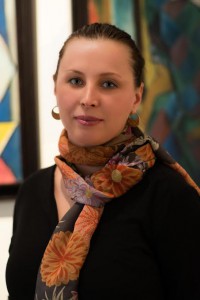 Swiss Dragons encourages you to visit ArtDynasty Gallery to discover the other two Sanadze masterpieces, so different in style yet so vibrant in expression. He offers us a glimpse into the artistic duality of Soviet Artists who followed policy and yet succeeded in expressing their own personal points of views and styles.