[VIDEO] WATER IS LIFE : Discover how Nereid’s technology will save lives

Swiss Dragons aims to elevate human dignity by enabling access to essentials through new technologies such as Nereid’s supply of drinking water.

Swiss Dragons is honored to present to ICDO a new desalination technology developed by Mr. Huy Ton That, the founder of Nereid S.A. that converts salt water and brackish water into drinking water and crystalized salt. 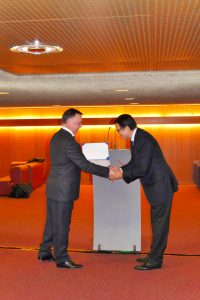 Nereid receives a Certificate of Appreciation from the ICDO

When fossil energy sources are used, they contribute to deteriorating climate change, which negatively affects the water cycle, thereby intensifying the original problem that desalination is intending to solve.

For desalination to remain a viable option in a world with a rapidly changing climate and increasing droughts, renewable energy sources must to be used for powering at least part of its requirements.

Cost Effectiveness : The unique design of the condenser dramatically reduces the cost of the Multi Effect Humidification by Direct Contact (MEH-DC), which potentially is the most cost effective desalination system on the market.

Environmental : The MEH-DC is capable to crystallize salt from the brine output of traditional desalination plants to achieve zero liquid discharge.